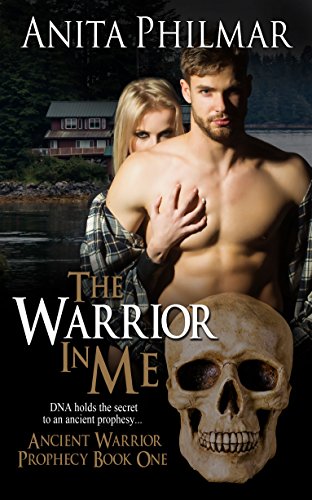 Hi Guys! So, I totally needed something to break the monotony of Election Week and decided to this his AMAZEBALLS ARC (Advanced Reader Copy) of The Warrior in Me by Anita Philmar.

Now y’all know I am nothing but honest when I write these things, so I have to start with this. I almost put it down. Those of you who have read my Bio know that I grew up in Alaska and know the area pretty well. So when I started it, I was questioning the author’s research of an Alaskan summer, and my sanity and memory. I had to think about if I would do any of the stuff she was describing, being from Alaska myself. Then I had my “AH-HA” moment and went OMG of course not! I’m acclimated to Alaska and it’s weird weather. Our Female Protagonist, would not think that Humid, breezy ocean air, even in July is warm. No matter how much I would.

Of course, once i slapped myself for that and forgave Anita, I continued reading and I was hooked. The story is thrilling, sexy and takes you on a ride full of twists and turns that you wouldn’t ever expect to be there! I Wanted more of Sabastian and way more of Lily, and can’t wait to see where this series goes! Honestly I am hoping that we get to see Rex and Bruce meet their perfect matches, because Rex needs to loosen up some and Bruce needs to mature a touch.

But honestly guys what would you do in Lily’s shoes? Faced with the death of your body guard, ex-husband, being the center of the investigation and then being hunted for money and prestige that you never wanted to begin with? And have to contend with this giant Neanderthal of a man plaguing your every step?

Would you run away? Or would you run to him and let him help you solve the mysteries that you are being plagued by and get you out of trouble with the law? Think you have all the answers? Then go ahead and take a look at the blurb for The Warrior in Me below with a great expert from the book, or even better, Pre-order it from one of the links below.

It hits E-Books shelves on the Friday the 11th! Happy Reading!

Special Security Agent Sebastian Berlin is eager to track down his partner’s killer. Instead, he’s assigned the job of baby-sitting a scientist. His boss thinks she’s the key to an Ancient Warrior Prophecy. Science never interested Sebastian, but the know-it-all female standing at the end of his Alaskan dock could persuade him to do a little experimenting. That is, if he can keep his Neanderthal Warrior genes from taking control.

DNA specialist Lily Sinclair is in need of a vacation, or so her over-protective ex-husband tells her. Arriving in chilly Alaska instead of sunny Cancun, she’s tired and cranky and so not in the mood for her bodyguard’s he-man tactics. Still, there’s something about the sexy eye-candy that makes her want to lick him all over even as she’s demanding to go home.

Then Lily’s ex is poisoned, and Sebastian is certain the two murders are connected and she could be next. She knows he’s hiding something, but with the worldwide release of Neanderthal DNA project only days away, she has no choice but to trust him to protect her. But can she trust him with her heart?

Seconds before his mouth covered hers, she whispered, “Sebastian, I don’t—” The rest of the sentence died under the quick spear of his tongue, seeking entrance into the hot moist haven of her mouth.

The fight he expected didn’t fully materialize. She gasped in shock, and her body stiffened. Then she lifted her hands to his shoulders, leaving the few inches between them vacant.

Tightening his grip, he drew the soft cushion of her breasts invitingly against his chest. All too quickly, he moved past the point of a simple kiss and fed on her unique flavor. He’d gone too long without the seductive touch of a woman. Today, she’d tempted him with the fire of her anger and the gentle concern for him at the loss of his friend. Holding himself in check, he’d resisted until she’d revealed her passion for her research. Now, he couldn’t contain his enthusiasm for her any longer. He ate at her lips, nipping and sucking until they opened wider.

Lily moaned, and he captured the sound, swallowing it as he flicked his tongue against the roof of her mouth. She welcomed him by drawing him deeper. He thrust in and out, over and over mimicking the ancient rhythm of sex.

Determined to sample every inch of the hot, moist cavity, he drank in the rich, sweet nectar. As stimulating as wine, he became drunk on her and tangled his tongue around hers. Time lost meaning. He forgot everything except her hands in his hair, her body plastered against his, the relentless need to consume her.

Somewhere in his subconscious, something reminded him that women didn’t progress from “Hello, it nice to meet you” to “Do you want to go to bed with me” this quickly. On the other hand, maybe, the light tingling of his scalp as she curled her fingers in his hair helped jog his memory. He had to take things a little slower if he wanted to win the girl.

Now available for PreOrder at

The Warrior In Me (Ancient Warrior Prophecy Book 1) Kindle Edition

The Warrior in Me

Anita Philmar likes to create stories that push the limit. A writer by day and a dreamer by night she wants her readers to see the world in a new way.

Influenced by old movies, she likes to develop places where anything can happen and where special moments come to life in a great read.

Read her books and decide.