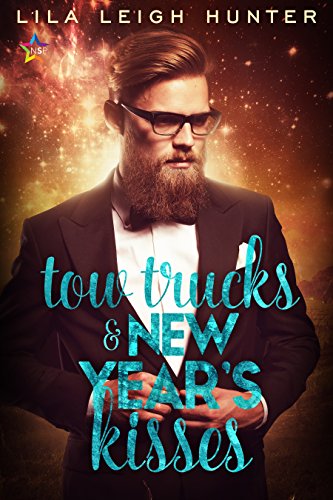 A Jag with out-of-state plates is the last car Scott DeLaney expected to find when answering a tow call as a favor to his drunken godson. But, the tall man in the fedora seems like a nice reward until Scott finds out the stranger’s destination. Yes, he’d take care of the brooding man, but he has a selfish reason for it.

Finding himself in a ditch after dodging a deer is the least of Patrick Samuels’s problems when his rescuer arrives, wearing a tuxedo and driving a hot pink flatbed. Perhaps his older brother’s scheme will benefit Patrick after all.

Who knew that a New Year’s kiss is far more efficient than any boardroom strategy to seal a deal?

What a fun little read! New Year’s Eve and your car gets stuck in a ditch. Call the tow guy. Check. Wait for him to show up in the… Hot Pink tow truck?!? And to boot he’s hot as hell as well. And sets your blood to boiling. Well, jump his bones. Except, that he doesn’t run the company, he’s not really their driver and… You’re planning on firing him come the New Year.

That’s exactly what happens to Patrick when Scott shows up. He wants him. Scott wants him. But there are problems with the fact that Patrick wants to sell them all out after buying to co-op the family runs and fire them all. But will the lustful feelings that Patrick and pansexual Scott have for each other get in the way of business, or help business? Well, if you want to find that out then i supposed you had better go pick up your copy of  Tow Trucks and New Year’s Kisses from all available e-book retailers. But, I know for most of you, my loyal readers… It’s just easier to send you to… THE ZON!

Go get your copy of this interesting LGBTQ+ story today!