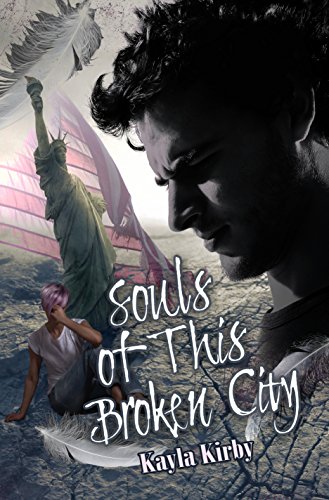 Welcome, welcome, welcome! Did you remember to bring your coffee? How about your cookies? Or cinnamon roll? Pizza? Popcorn? Whiskey? Beer? I think I covered it all. Hot cocoa? How the hell could I forget the hot cocoa?!? I’m a mess today. Probably because I couldn’t put down this book. Souls of This Broken City, by Kayla Kirby, a pretty good friend of mine.

Okay, okay. I know what you are saying. Do you review books from anyone who isn’t on your Facebook friends list. Yes. I tend to review every book I read. But, if I don’t enjoy the book, I don’t want to tell you about it. Why would I? I don’t want to clutter my book reviews with bad books. Unless you have a book you want me to read and review here. Then I will. In fact, I am almost positive I have a meh review or two coming up in the near feature. Because I agreed to do them. But, neither here nor there, I am reviewing this book today. Let’s begin shall we?

We start this book on a journey, being sent into a new journey of discovery. Trying to remember who someone is and why they are. Who we are and why we are. Where we are and why we must be there. Because it is our job to be there. To be us. To be the who, the what, the why. To be the how. And to be the one who  everyone loathes, and loves at the same time.

We get brought to the light, and thrown to the darkness. Only to have our breath ripped from our lungs and shoved back in again. On this roller coaster ride of discovery. The vexing path of growing up. Abuse, scandal, hate. Xenophobia, racism, conspiracy. They all play their roles in this tale. Things that months ago we thought were starting to settle in our society, but are now rearing their ugly heads are the focal points of the turn of this world. The dystopia, the dysfunction. The disjointedness of this world.

Brother, sister, best friend all fight together to ward of the physical terrors that taunt them daily, from the kids and predators at school, to the violent abusive step-father at home. To afraid to speak, the fear of separation keeping Chase silent, keeping Megan from being a child. Keeping Buck from ever truly brawling with the assholes in school. Because then who will protect Megan? Who will keep her safe once Chase is gone.

Twins, an Ichor, and their Father. Revenge, unwanted brotherhood and full blame on his shoulders. Robert blames himself for his brothers disease. His father manipulates him for this. His brother, ensnared in their fathers web of lies and deceit, no way to get out, he can’t fight the brainwashing anymore. And the father, old, ancient, and in control, but slipping slowly as his son fights him, calling him on his shit at every turn.

The Ichor, true evil in its purest form. Lucifer’s minions. Hellbent on destruction, they want the world at their feat, bent to their wastes, to do with as they please.

A war has been going on for centuries. A war between good and evil. The bible, koran, torah. They all speak of it. How much attention have you paid?

Seriously, go buy this book. It’s on Amazon for Pre-Order right now, and is set for release Dec. 15th!